Tuesday, cloudy day in Miami, not really good weather for the beach, but who cares. Today is FOWA day!

Check in was within 08-09AM in beautiful Adrienne Arsht arena. Checked location on Google maps, it’s just nearby my hotel so no need to deal with car. Arrived just few minutes before 09AM, so after they checked my data they gave me blank pass and pen to write down my name/company on it. As every proud Serb I took the chance to draw Serbian flag there so my geek colleagues knows exactly from where I am 🙂

Inside of hall there was bunch of geeks from all colours and ages … but most of them have one thing in common. They were all armed with a Macbook. I counted like 50 Macbook (Pro) laptops, with only one sad PC guy. I joined the mass with my Macbook Pro and started with some kind of live broadcasting to well known Serbian Development Forum. 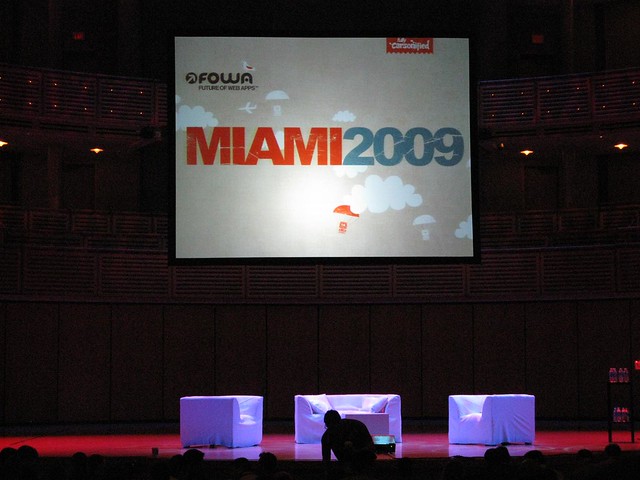 Before he started his intro speech, Ryan Carson asked from us to meet and shake hands with each others. Most of us were doing that … “Hey bro, how yo doin’ …” and suddenly robots becomes men. Well done Ryan.

First guy on the stage was Jason Fried who were talking about their Getting Real philosophy. Without much noise and any presentation screen behind, he mentioned plenty of good advices regarding productivity, sales, future prediction etc.
Jason complained about giving away software for free, because food is not free, our cloth is not free, our car is not free … so why in the world software you made should be free? 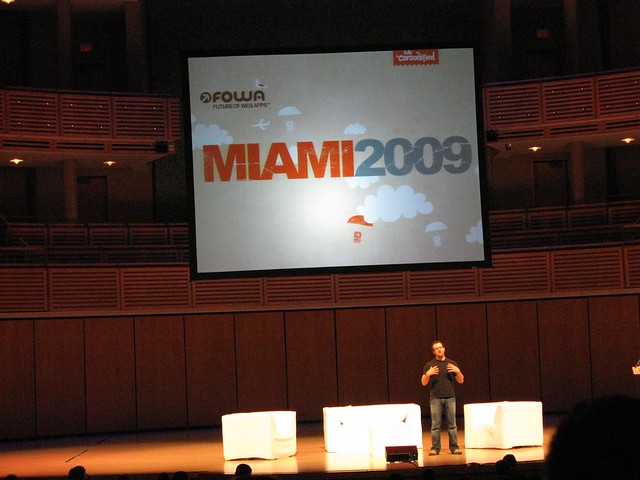 After Jason Ajaxian guys (Dion Almaer from Google and Ben Galbraith from Mozilla) took the stage. Their speech was much more interesting to me, with plenty of effective screens behind, describing what is going to happen with browsers in the near future. In one word – revolution, which is going to get current Ajax based applications even more usable with usability closer with those that we have on OS X (they frequently used Mac examples). 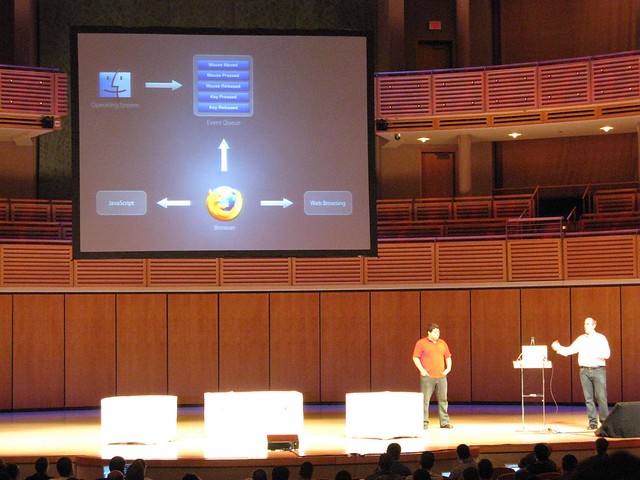 After Ajaxian guys, Dan Theurer from Yahoo took the scene. Unfortunately his presentation file was corrupted so somehow he did his speech too fast. Also without presentation slides behind it was really hard to track his speech so many developers took the chance to play with wireless and at the end it seamed that Dan couldn’t wait to move away from the stage which was kind of shame.

After the morning break there was probably the most effective talk made by Joe Stump, lead developer of Digg-a. 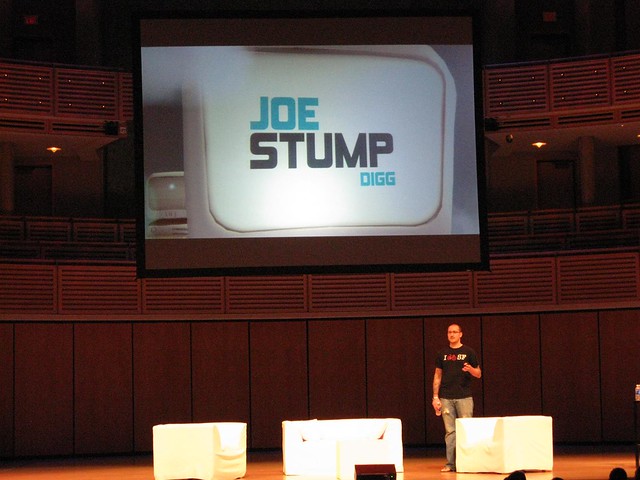 Joe used ingenious slides with him and his brother pics from their childhood in attempt to present developers as lazy, moody and egocentric guys (come on, we all know that it is completely the true), and how to make compact and productive team from them.

(finding senior programmers is not easy – demonstrated by picture of kid with light Jedi like sward in hand). 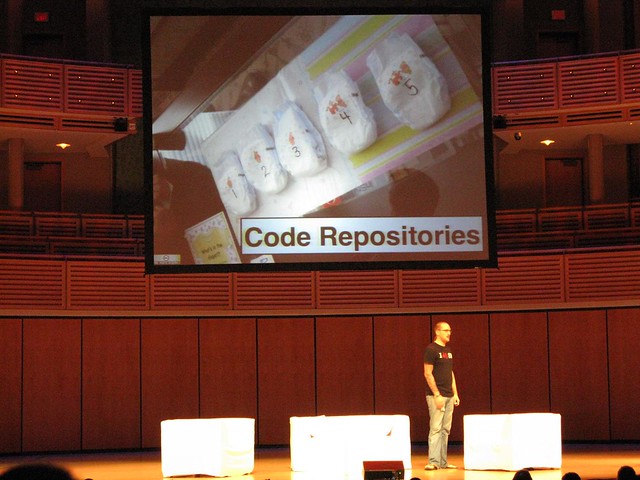 After they ended Aza Raskin from Mozilla took the stage to tell us about all those great little things Mozilla Lab is preparing for us. He was talking about Ubiquity, kind of Firefox add on which would allow you to do many things, like changing content on pages you’re visiting often (like you could easily replace Google logo with your own ad), and many other things. Unfortunately backed guys screwed it again so Aza also stayed without his presentation and had to leave the stage and finish it at the end of show. 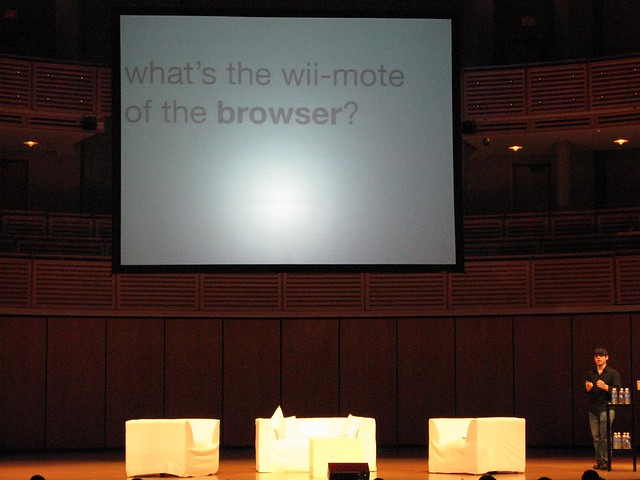 After lunch break Joel Spolsky made an interesting and funny talk, where he talked about programmer’s efficiency, setting working environment, office stuff etc. Like Jason, he also mentioned interruption as one of the biggest enemies of programmer’s productivity. He claims (and I totally agree) that every developer during his working day usually has about 2 or 3 hours of “total focus” in which time he is 100% focused on problems he is solving. During that period developer usually doesn’t feel the time (2 or 3 hours pass like a snap). Noisy environment, phone ringing, even going to the toilet are the worst enemies of every programmer.
That’s why big companies that are paying attention to those stuff (like Google) are trying to keep developer’s focus as long as possible with ie. keeping his snack near by, the same with toilet and even shower booth 🙂 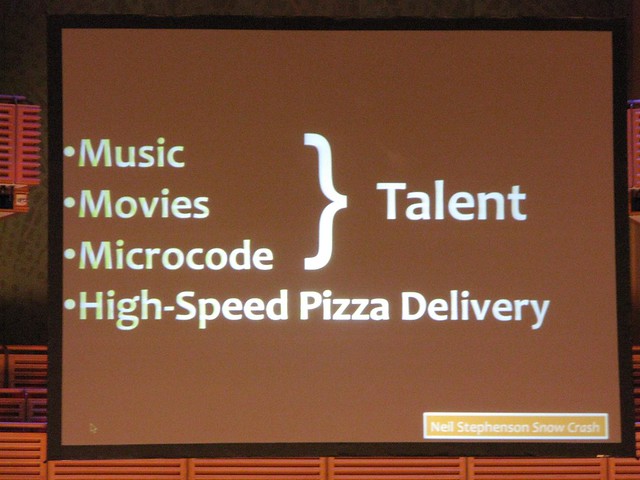 After Joel, some very effective (but personally not so interesting) talks was made by Dave McClure and Alex Hunter from Virgin. And after pause there was another one “talk show” with Joel, Jason and Caron, after which Francisco Tolmasky from company 280 North took the stage.

Francisco made great workshop with Cappuccino and Atlas tool. By using Atlas – kind of point and click tool started from the browser on local host, he used point and click interface to create an feed reader application in like 3 minutes! After that he did the same for iPhone platform. I liked whole thing except the fact that you don’t have ability to do kind of “synchronization” between iPhone and Web project (things are kept in separate files). I even took a chance to talk with Francisco after the show about that, who was BTW the only speaker I had a chance to meet personally. 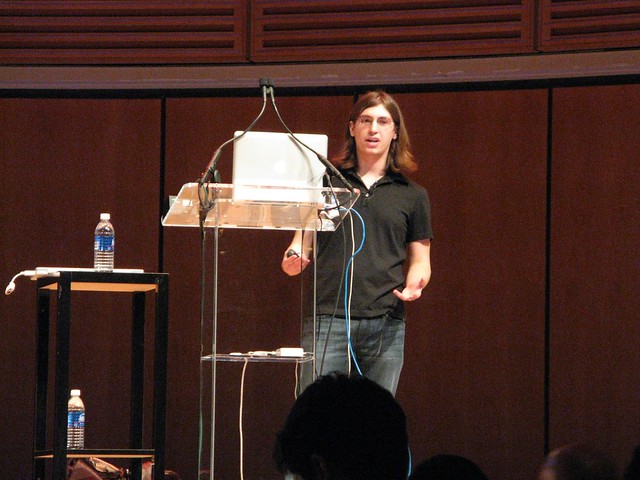 At the end there was Gary Vaynerchuk’s talk who somehow acted like a Eminem, he talked loud and fast, sometimes cursing, screaming … I could say almost crying 🙂 Don’t have enough time to repeat everything Gary said, so if you have a time, here’s the video of his talk 🙂

Gary Vaynerchuk at FOWA Miami 09 from DamianVoltes.com on Vimeo.

At the end we were invited to visit the party on Nikki Beach which as far as I can tell many developers did. Free beer provided by Microsoft … you could hardly find something more attractive 🙂 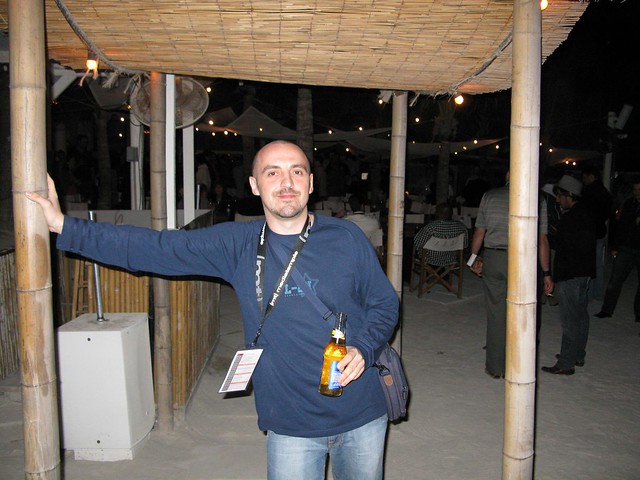 My Personal pics from FOWA conference

P.S. This is English translation of FOWA Conference report made originally in Serbian. Now when I got back to my sucky homeland, I managed to translate it completely. Hopefully you enjoyed.